Aftermath of a Wildfire

In late June and early July of 2013, a number of fires raged in drought-stricken SW Colorado. Three fires came to be know as the West Fork Fire Complex, which covered 110,000 acres by the time it was contained. The town of South Fork was threatened by the fire, but very few structures were lost. The San Juan and Rio Grande National Forests suffered the worst of the destruction.

Since the fire, monsoon rains came to the tinder-dry forests. I visited the scene of the Papoose Fire less than a month after the inferno raged.

Upon entering the charred woodland, a strong smell of smoke lingered in the damp air. The blackened landscape seemed quite foreign. Pine needles and ash mixed to form a soft carpet on the scorched forest floor. Rain and harsh sunlight now penetrated what was once the tree canopy with ease. Trees were now little more than dark trunks. However, there were signs of life in the midst of devastation.

Small plants and even young aspens pushed through the layer of ash as green dots in the monochrome landscape. Fire is a part of a natural process of renewal, and the environment will quickly become more recognizable.

While some scenes give cause for optimism, others still show the horrors of wildfire. Looking skyward, I was reminded of the barren terrain of Ypres and other apocalyptic battlefields.

The fire's perimeter was readily apparent, even from a distance. Green, lush vegetation abruptly turned to black, dead stumps. Fuels, wind and humidity determined which areas would burn and which would be spared. 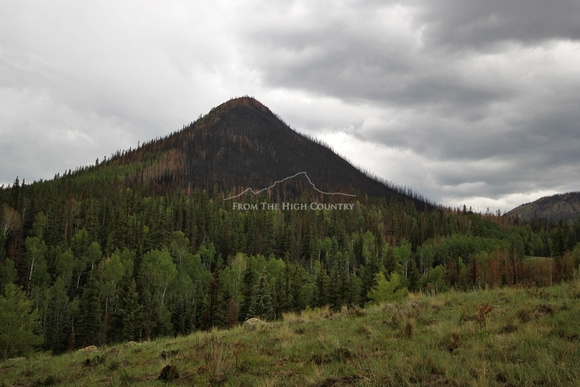 After closer inspection, the locations of spot fires could be determined. Small 'advance' fires were all-too-easily sparked by flying embers. Now they are strange patches of darkness in an otherwise colorful wilderness.

Rivers, too, bear the marks of wildfire. From a distance, they seemed to run black with the ash that settled on them or has been washed from bare slopes. Now they are swollen with summer rains that have brought peace to the forests once more.