The Forest and the Spruce Beetle

As some of you know, I spend a lot of time in the wilderness around Lake City - probably more than most. One fact is now obvious; the forests are changing.

Once a rarity, the sound of the American three-toed woodpecker can be commonly heard (but not always seen) in southwestern Colorado's forests. Dead trees can be found surrounded by piles of brown needles and pieces of bark, and bare branches, like skeletons, hint at the life that once was. Early this summer I sat in my truck at the side of the road on a high mountain pass and watched the invader crawl across my windshield. The spruce beetle has a particular fondness for Engelmann spruce, and can cause death rates as high as 100% in some areas.

North American coniferous forests have been under sustained assault for around twenty years. Pine and spruce beetles have been thriving due to warmer average temperatures and droughts. Long, extremely cold winters usually keep the beetle population in check, and trees weakened by a lack of water are more susceptible to insect attack.

Little can be done to stop the spread of the spruce beetle in a meaningful way. Insecticides are non-selective and could kill natural predators (while being ineffective against spruce beetles in trees) if used on a large scale. Pheromone traps can be used to suppress beetles in specific areas, but is not a practical option in wilderness areas. Once a parasitic beetle population reaches epidemic proportions there is little that can be done to halt the damage to forests.

Parasitic beetles bore tunnels in their chosen tree species, which slowly kills by cutting off a tree's water and nutrient supplies. It can take over a year from infestation to death, meaning that only the destruction from the previous summer is evident at a glance. 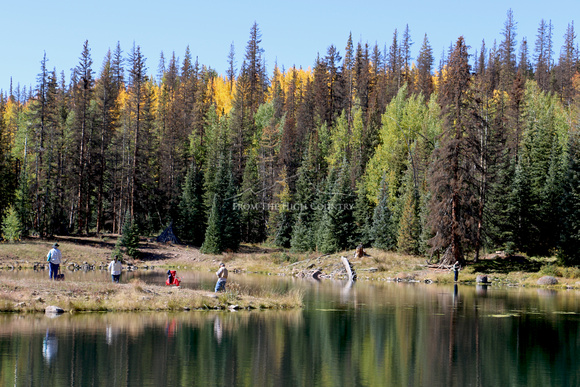 Anyone who spends time in the forests should remember this: Standing dead trees are no longer securely anchored by a healthy root system, and can fall at any time. You must stay alert. Logging will take place in some areas where this presents a public safety issue, but dead trees will remain in the wilderness for some time to come.

The West Fork Fire Complex consumed vast areas of forest last year. Fire surely kills beetles, but the contribution of dead trees to a fire is surprisingly unclear. A dead tree is obviously dry, but the needles of a living tree contain volatile oils that allow fast moving, deadly crown fires to develop. If the needles of a dead tree have fallen, does it present less of a fire hazard? The experts are still trying to determine the answer, but it is known that weather is a much bigger factor in forest fire propagation. Once started, a fire will readily consume any kind of fuel - dead or alive.

One thing is certain; fire, like the tree-killing spruce beetle, is part of a natural cycle in forests. Some say that decades of over-zealous fire suppression created perfect conditions for the beetle plague. If there is any good news, it would be that the forests will recover. Dead trees are not a pretty sight. I find myself cropping them out or even discarding photos these days. However, there is life in the beetle-ravaged forests. Small, healthy trees can be found in abundance, and neighboring aspen stands will expand into new territory with surprising speed. Just weeks after the West Fork Fire, I observed many young aspens poking through a layer of ash.

Our forests may never be quite the same (at least not in the lifetime of anyone reading this), but they will return to life. It is easy for us to think of the natural world as a constant part of our lives, but it is in a state of constant change. Just like the seasons, we have to appreciate the present and look forward to what the future will bring.