Two months had passed since I signed up for the San Juan Solstice 50 mile race. I had switched from winter sports to road running and had already endured one major setback. As March progressed, I began to run greater distances. I ran my first half marathon along the Silver Thread Scenic Byway with snow covering all but the road itself.

Long distance running is hard on the human body. If a run takes more than an hour it's a good idea to consider hydration and nutrition during the run, which means carrying it with you. I bought my extra kit as soon as possible in order to get used to the weight and to learn to make the best use of it.

Towards the end of March, I made an attempt at 17 miles (around a third of the race length). After being dropped off in what felt like the middle of nowhere, I began the run. Everything felt wrong. I was tired. My kit felt too tight. I took too many breaks and fell far behind my regular pace. The miles passed slowly. Sometimes it takes a few miles to fall into a good groove, but it never came. By the 13 mile mark each step was painful, and I had to quit. That lingering muscle problem was back.

With more than a little doubt in my mind, I spend the next week doing what I called 'rehab runs'. More of a walk/run, each was designed to allow me to cover enough miles for the week without making anything worse. The following week, I ran that 17 miles.

It was time to move up - literally. Having mastered the basics, I decided to begin training at a higher elevation. The highest part of the race is 2.5 miles above sea level, where oxygen levels are around 60% of coastal areas and many states. I needed to begin to work on longer hill climbs and running at high altitudes, but the high country snow pack was still far too deep to even consider running on real trails.

After finding problems with my road shoes, I switched to the shoes I plan to race with. In fact, I began to run with almost all of my race kit. As the temperature hovered a few degrees above freezing, I ran through everything from light sleet to brief blizzards. Still, I began to see the deserted highway in a different way. As you drive along a road, you get a glimpse of the world outside. Run that same stretch of asphalt and you begin to see the world around it, from spring growth to the wildlife inhabitants of the forest beyond.

As the month drew to an end, I was able to cover over 50 miles each week, and my individual runs continued to grow longer. Days between runs became stretching and strength training days. I was getting stronger all the time. 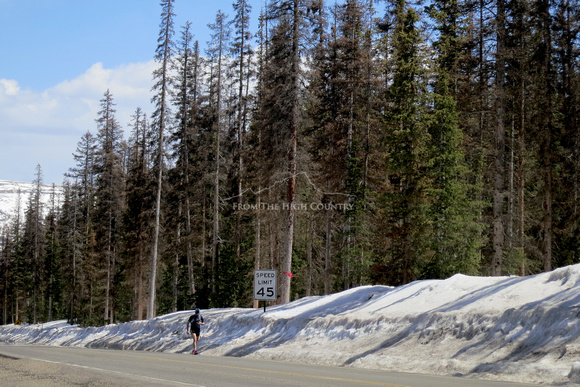 To read part one of my training diary, click here. Part three is here. To learn about my ebook, How To Run Your First Ultra-Marathon, click here.

To see images from the various sections of the SJS50 race, click here.

My attempt at the SJS50 is partially sponsored by Alpine Animal Art.