Finding a 350" Elk in the San Juans of Colorado

At the end of January, during a relatively dry winter, I went wandering into a particularly dense patch of mixed forest in some very uneven terrain. I had first explored that area the previous September while hunting for fall color photo opportunities, so I was reasonably certain that I would be able to navigate once I descended into the ravine. As I followed a stream at the bottom of the ravine, I noticed two bony protrusions in the snow. A few minutes of digging revealed the largest elk antler I've seen in the forests - with the skull still attached! I tried to move it, but earlier temperature fluctuations had caused snow to thaw and freeze. With daylight beginning to fade, I decided to make my way to easier ground and head home for the day. 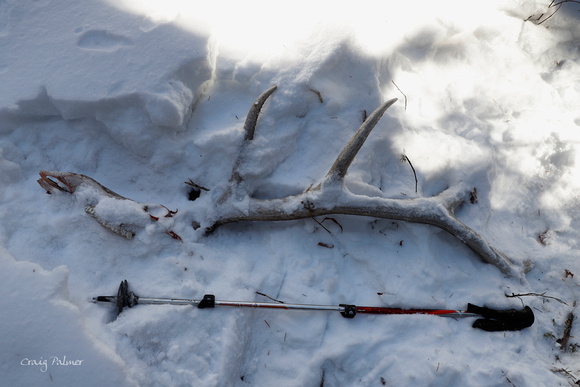 I have seen and heard elk in that area several times, so it wasn't entirely surprising to find a skull and antler, but I was curious as to how the big guy ended up there in the three months between my visits, and I resolved to find that same spot when the spring came.

Life happens, but it was always in the back of my mind when I hiked within a few miles of that spot. As a photographer, fall is my busiest time of the year, but as the last leaves fell and the possibility of snow increased I knew I had to make the trip again within the next couple of weeks.

On a cool morning, I headed back into that remote and unforgiving terrain to find the elk's resting place once more. After passing through bare aspens and long grass, the forest slowly became an even yet densely packed mix of tree species that sunlight often struggled to penetrate. I made a slow descent into the ravine, using glimpses of nearby rocky outcrops and hills for navigational markers and relying on my memories of features within the forest to direct me as I got closer.

One last fall photo opportunity necessitated a detour, and then it took longer than I'd like to admit to find my objective from the opposite direction, but sure enough a full elk skeleton had remained untouched by human hand. Only the antler and skull were visible in the snow back in January, but now the scattered bones showed that it was indeed the spot where he fell.

The skull and antler weighed around 15lbs and made climbing out of a forested ravine quite challenging, but I was determined to show it to one of the local experts. I attached the lower jaw to my pack and carried the rest over my shoulder.

As you can see in the photo below, his right antler had not grown properly. It was much smaller and was situated slightly forward of the usual position. The amount of teeth wear suggested that he had probably died of old age, and if that's the case he picked a picturesque stream-side spot. 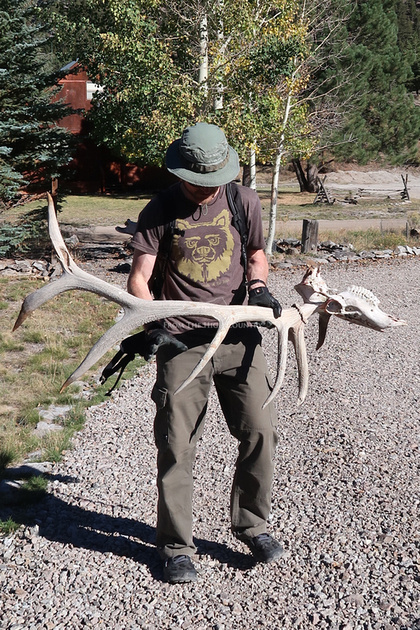 I was told that he would have been a 350" buck if he still had his other full-sized antler (we think perhaps he had an accident of some kind). I'm not entirely sure what that means, but I do know he was above average in size.

At the time of writing, elk hunting season has just begun. I spotted this guy very recently; I hope he's better at hiding from people with rifles instead of cameras!

Despite living near wildlife, we usually only get short glimpses into their lives. We see them grazing or wandering across the landscape and we see their tracks in mud and snow. Bones are reminders of the transitory nature of life - for all living creatures.