Over the years, I've found several old cabins away from the roads and ghost towns around Lake City. Most had some connection with mining, while a few may have been hunting cabins. I thought the chances of finding a new one were slim, but I recently noticed a dot on a very old map (1905) and decided to try hiking through some new terrain to find it. I checked aerial imagery in the area, and discovered a possible ruin. 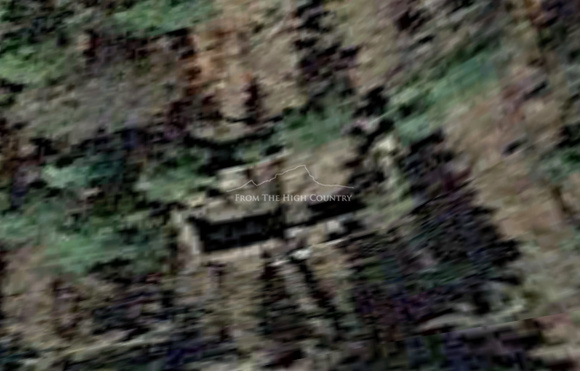 It's blurry and low quality, but it sure looks like a cabin-sized rectangle!

With enough evidence to act upon, I plotted a route in. The cabin lies within a steep sided valley, and the route taken by prospectors is now a tangled (and at times nearly impassable) mess of fallen trees, dense vegetation and steep, loose ground. I decided to head up to the high ground, follow that until I hit a ridge running behind the cabin site, and then drop back into the valley (using terrain features to navigate throughout). 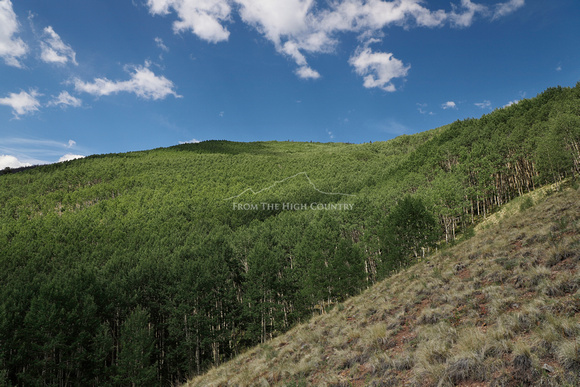 Shelter from the sun ahead, but still a long ascent.

It started well, and after a few minutes of trail, I ventured into wilderness and picked up deer trails whenever they headed in a convenient direction. Given the hot weather, I was carrying extra water (over a gallon) in addition to my camera and first aid/survival gear, and the shade offered by aspen forests was a welcome relief even in the early morning. 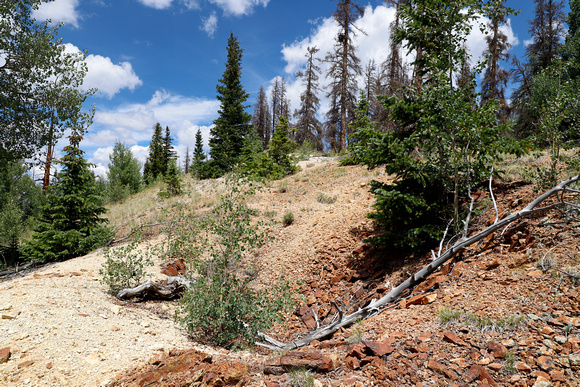 Evidence of prospecting on the ridge.

There were no signs of human activity on the 2500' climb to the ridge, but as I followed it I soon noticed what looked like a prospect pit (a small hole dug by prospectors looking for signs of valuable ore). Was this the work of the cabin's builders? Quite soon I would follow my plan and descend 1200' in 30 minutes, hopefully reaching a creek with my objective on the opposite bank. I took a last look at my landmarks and dropped into mixed forest. 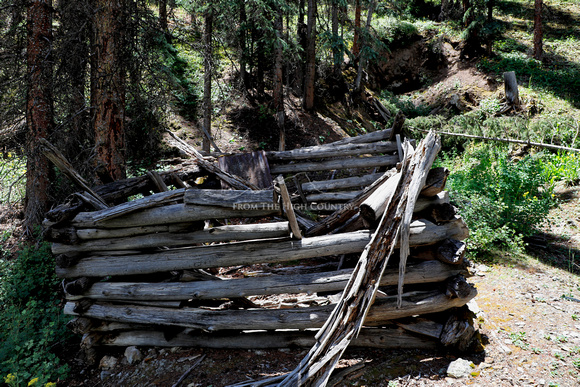 An unexpected find - collapsed portal in the background.

Knowing that I was heading into an area with a history of mining that is rarely visited by humans, I paid extra attention to my surroundings. I've found unlisted mines in the past, and did not want to step into one! As I began to doubt my navigation skills, or at least my chances of finding a log cabin in the middle of a forest, I spotted a feature and a small cabin on my immediate right. The feature turned out to be a collapsed portal, or tunnel entrance, and the cabin was quite small, with few clues to its exact purpose (since my objective - a larger cabin - was a quarter mile away). Having peered into the darkness of the adit and found nothing around the cabin, I continued toward the objective. 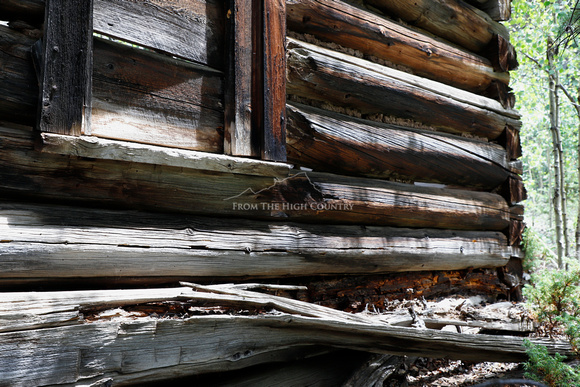 I ran into a surprisingly healthy-looking stream that ran perpendicular to my route, as expected. It was small enough to jump across, and I was scanning the forest for signs of a man-made feature as soon as my feet hit the far bank. After 10 minutes of searching, I noticed a surprisingly solid and robust wall. It was time to drop my pack and investigate further!

An overview of the cabin.

The structure was larger than most I've found. Those far away from ghost towns are usually quite small and less thoughtfully built. It was clearly intended to last for many years, and if not for 100 years of Colorado winters (most with no maintenance), the roof may have been intact. Without it, the cabin was doomed. 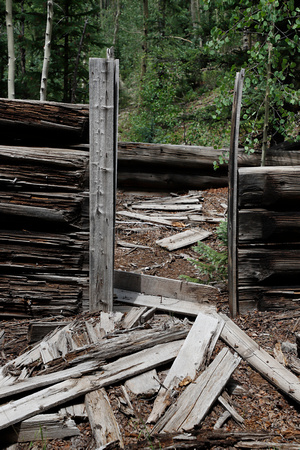 While it was in an advanced state of decay, it was still obvious that the builders knew their craft. One of the doors was still mostly intact, and framing for all openings was still attached to the log walls, which had been carefully reduced in width in those areas. At each corner, the logs had been cut into dovetail joints to create a durable structure. The builders clearly took pride in their work. Inside, I found an old metal tray, but decades of leaf litter probably hid any other artefacts. 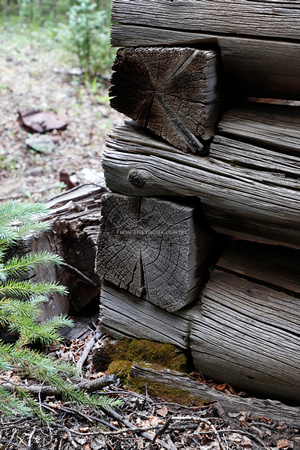 As I broadened my inspection to the surroundings, I found the usual can dump (thankfully we didn't have plastic back then), a few shards of ceramics and glass, and part of the soles of some very old boots. Who wore them and quite what they did out there, we'll never know. 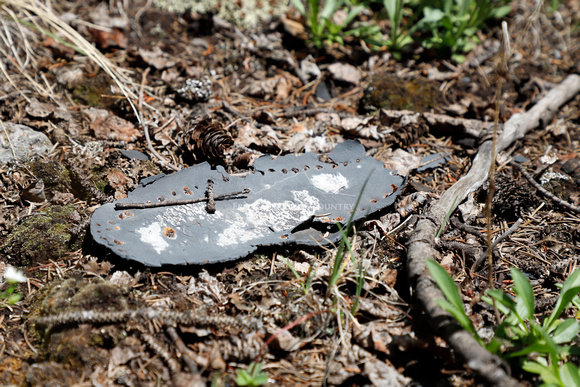 Remains of a boot belonging to the previous occupants.

Again, the leaf litter and cabin debris may have hidden any other fragments of interest, but I looked in wider arcs to be sure. I did stumble on two cans (Coke and Shasta) dating back to the early 1970's, when perhaps the original trail wasn't completely overgrown. I wonder if the roof was intact 45 years ago.... 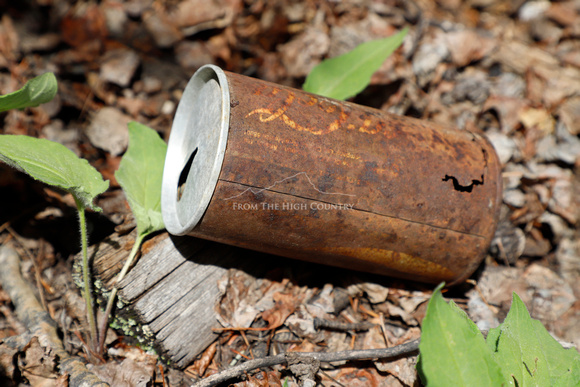 Trash from the last visitor?

I still had a long journey ahead, so I took a long drink and then followed what little remained of the original trail until it was fully reclaimed by the wilderness. Fresh bear scat illustrated the fact that this secluded patch of forest was once again a refuge for wildlife. Perhaps the bear had watched this wanderer cross through his or her territory. I soon ran into fallen trees and steep creek banks once again (the reason I had taken the scenic route in), so I decided to climb out to another ridge, where a relatively easy journey home could be found. 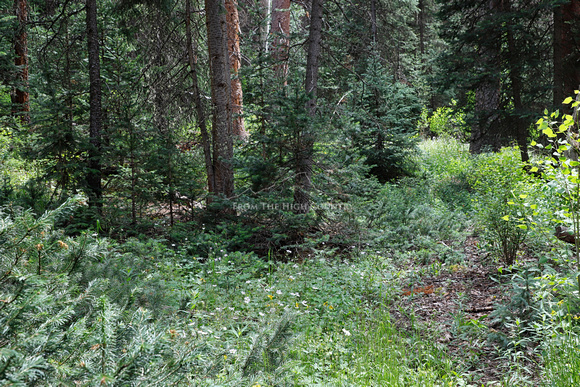 Wilderness returns where a trail once existed.

The forests and mountains are filled with surprises, both natural and man-made, and while the old cabin was my stated reason for such an arduous day, the sights, sounds and scents always make the journey worthwhile, even without uncovering a piece of Colorado's history.

If you enjoyed this, be sure to check out some of my other posts from the menu below (or to the right, depending on the format).

Waldo(non-registered)
Nicely documented journey into old Colorado history!
E. McElroy(non-registered)
Loved your story and photos of your journey to the old cabin. It’s pretty amazing that you were able to find it, given the fact that the trail to it basically no longer exists. It would be wonderful if those walls could talk and tell us about the people who had lived there many years ago.
Sandy Lawson(non-registered)
What an awesome find, thank you for sharing with us. I found myself wondering what the person or persons were like and were they miners or trappers or etc. Beautiful pictures!
Leslie(non-registered)
Very interesting! I thoroughly enjoyed the article and pictures! Thank you!
Shellie Riddle(non-registered)
I always love your pictures. This was really awesome how you discovered this treasure. Thank you for sharing.
No comments posted.
Loading...
Subscribe
RSS
Recent Posts
My Three Favorite Places to Visit in Colorado The Lake City Brewing Company Mountain Town Diaries Sticks and Stones - Rapid Healing From a Distal Radius Fracture Finding a 350" Elk in the San Juans of Colorado The Abandoned Cabin New in Lake City, Colorado for 2018 Wildfire Safety In Praise of the Buffalo Mountain Shirt Death in the San Juans
Keywords
fromthehighcountry photography colorado rocky mountains lake city mountains winter snow philosophy wildlife
Archive
January February March April May June July August September October November December
© From The High Country
User Agreement
Cancel
Continue