I first became aware of the Lake City Brewing Company when I was asked to supply prints for their new building a couple of years ago. I got to know Doug and Diane a little in the process and now consider the brewery my unofficial gallery, with five (yes, five!) of my large prints hanging on the walls (Doug or I will be glad to point them out). I've been showing up as part of the band playing on Saturday nights this winter, and it has been good for me to get out and see other humans...

A couple of months ago, I had asked if it would be possible to watch the brewing process in action, and I got that opportunity in late January of 2020. I arrived at 09:00 to find Brian, Doug's brewing protégé, preparing the equipment that would be needed for the day. 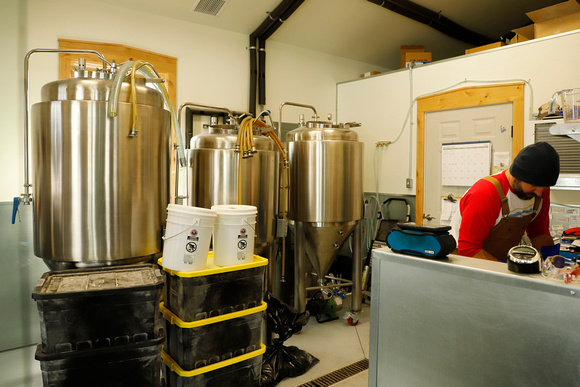 The stainless steel vessels are thoroughly cleaned between batches and must remain so until the moment they are to be used. A surprisingly large volume of ingredients are required, and those were packaged for the two batches to be made over the course of a few hours. 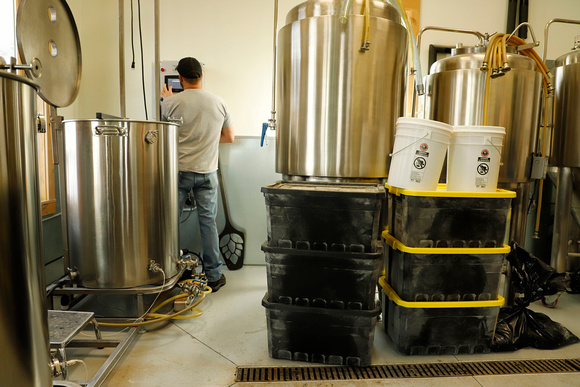 Doug, owner and brewer, showed up minutes later with hop pellets and the two began to work. Water volume and temperature are computer-controlled, so Doug's first job was to adjust the settings. 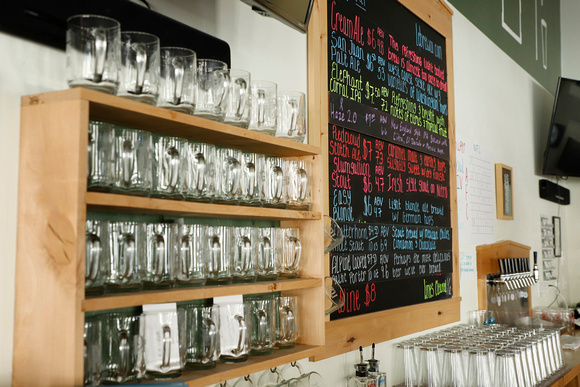 A bar without customers, in only natural light, is a strange sight. However, on the other side of this wall a new addition to the board would be created by the end of the day (and two long weeks of fermentation). 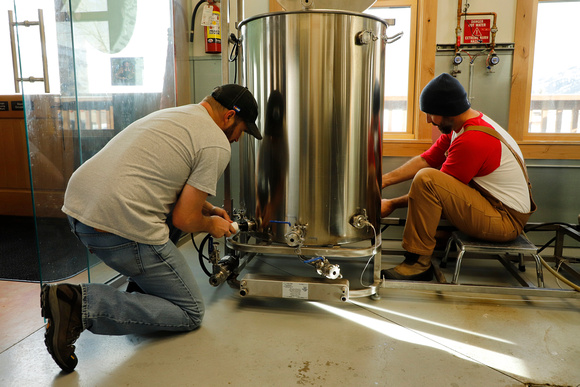 Although the purpose of the vessels seemed clear enough, there was a variety of hoses and fittings that would all be used during the process. 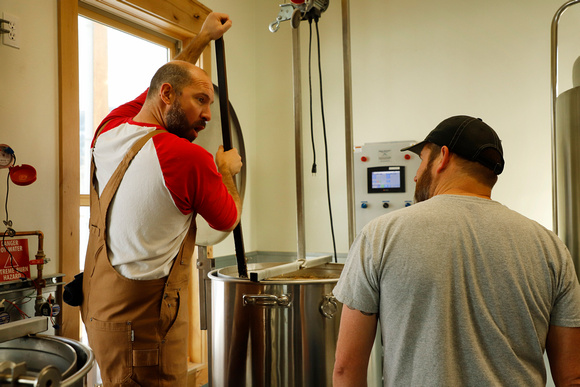 The first two vessels are called mash tuns. The mash is a mix of malt (malted barley) and hot water. It is during this time that starch is converted to sugar, which will later be fermented. 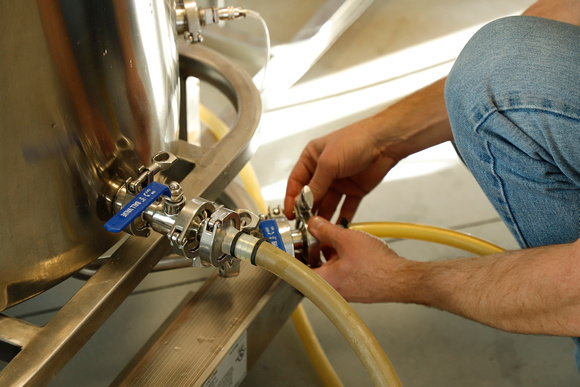 A heat exchanger can be seen at the bottom left, which will regulate the temperature prior to reaching the fermentation vessel. 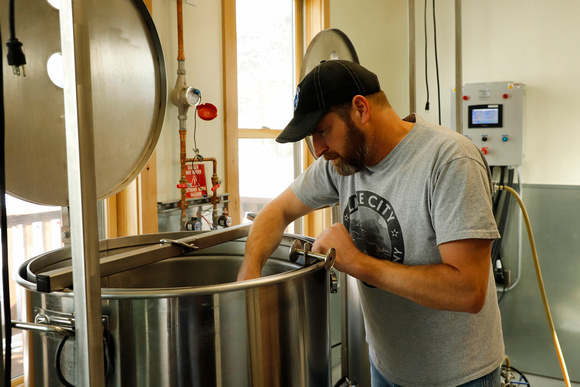 Once the mash ingredients were added to what would soon become an Oktoberfest beer, it was time to start the new style for LCBC - a dark IPA. 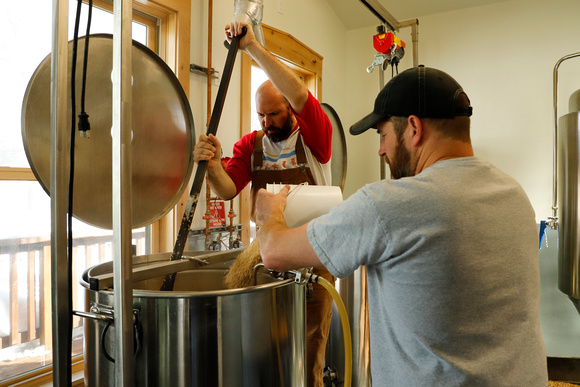 With all the stainless steel and computerized controls, it was nice to see that so much of the process was still done by hand. 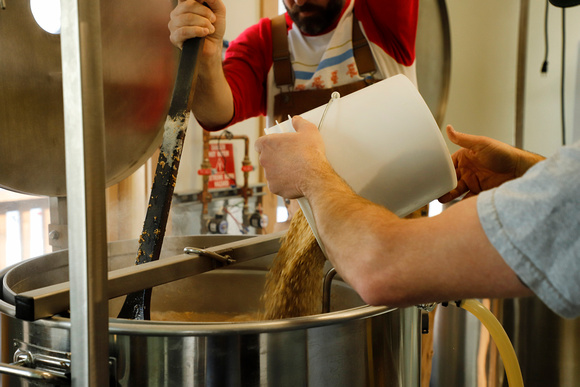 Depending on the main grain used, inert rice hulls were added to allow for a better mix with the hot water. Some beer mixes require a great deal of effort on the stirrer's part, and cause some difficulties when draining the sugar-rich liquid, which is called the wort. 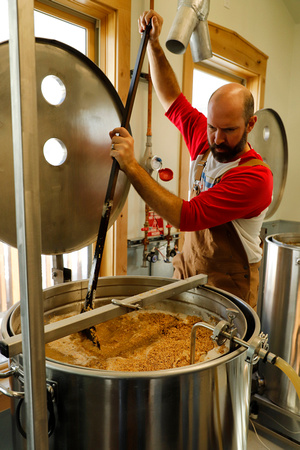 Stirring, as you can see Brian doing with much concentration, is a very important part of the job. 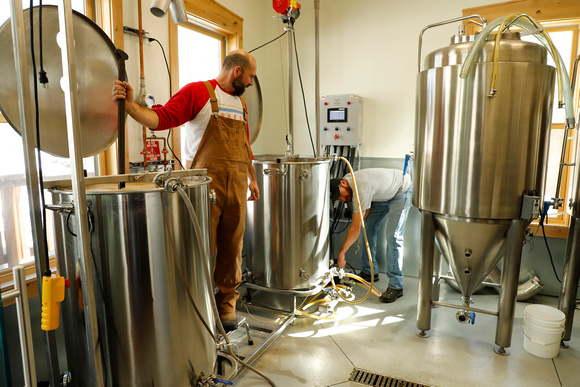 With both mash tuns filled, and enough time for the Oktoberfest (the first batch of the day), it was time for the next phase, which is called lautering. 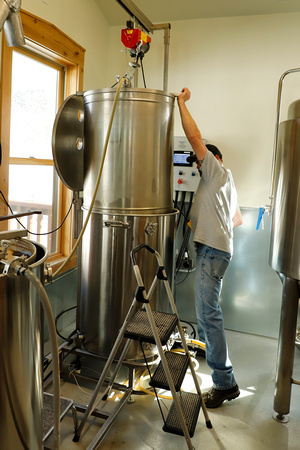 Lautering is the straining of the wort through the bottom of the mash tun. In this situation, the tun is raised and allowed to drain (leaving the malt and rice hulls behind). 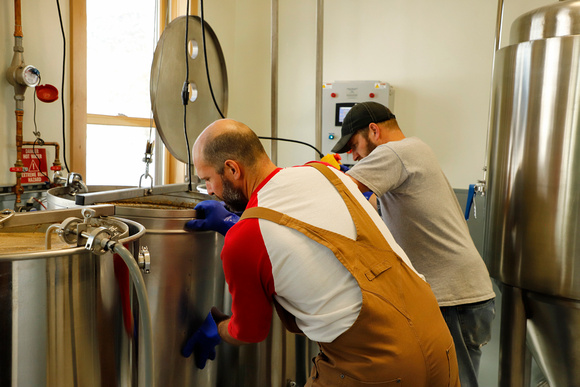 The vessel left behind is called a kettle, and this is where the wort is boiled with hops and other ingredients. The mash is removed from the tun and fed to local cattle who I'm told consider it a treat! 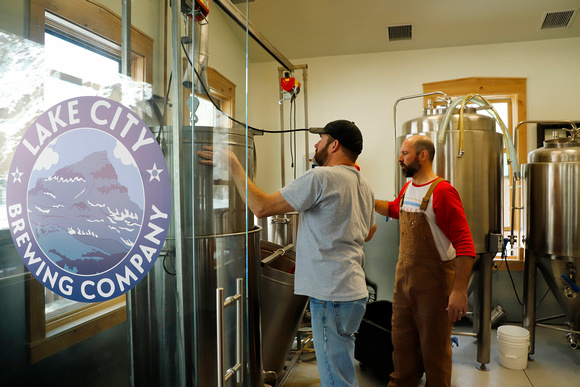 When brewing two batches, timing is key, so the two were staggered. The boiling process takes different lengths of time, depending on the style of beer. 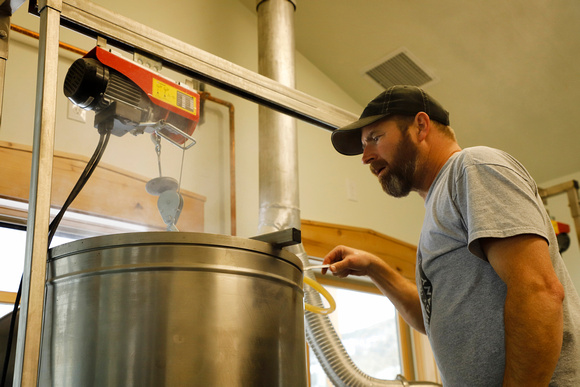 Doug checking on the dark IPA. 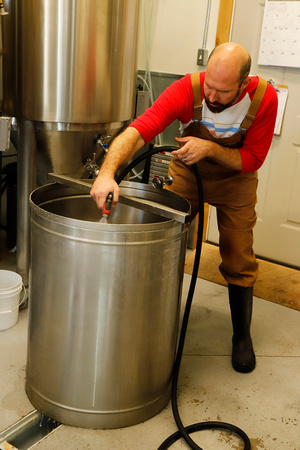 Brian hosed down and cleaned the first mash tun as the second drained. If properly planned, a day's brewing can be extremely productive. 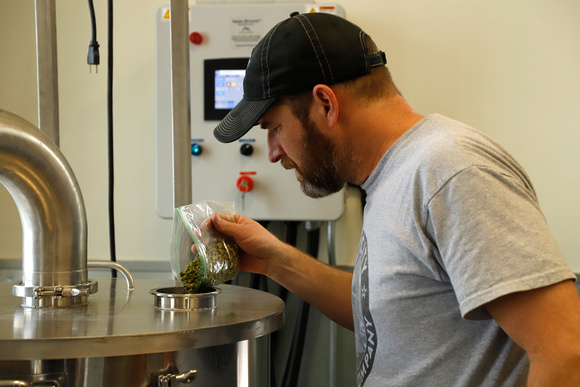 Doug added hop pellets to the Oktoberfest as the wort boiled. 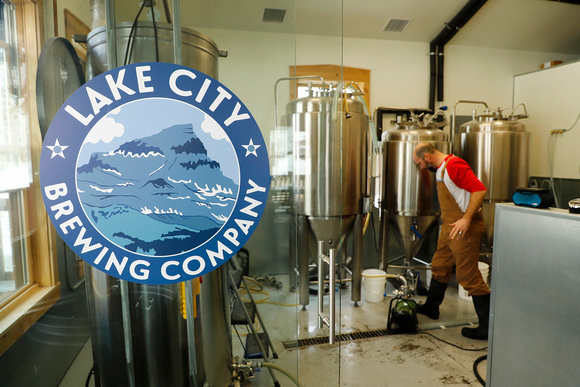 As a reminder, this all happens in the room next to the bar. A brewing operation of this size allows an onlooker like me to visualize the full process, and it's a great learning environment for Brian, who is working on his master brewer qualification. 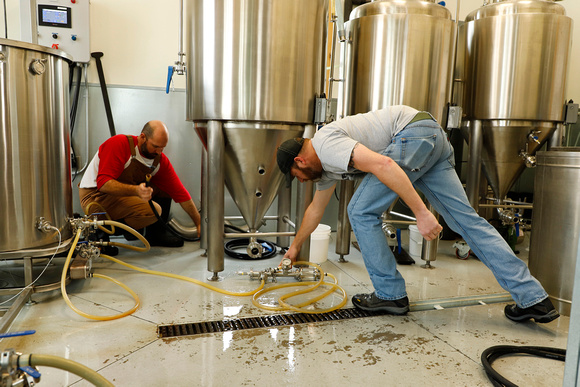 When the boiling is complete, hops and other particles are allowed to settle in a whirlpool effect before the wort is drawn into a heat exchanger where the temperature is reduced to a point where yeast can survive in the next stage. 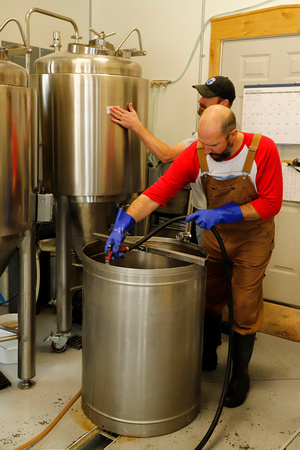 Brian cleaned a mash tun while Doug labeled the fermentation vessels. They have been discussing the name of the dark IPA all day... 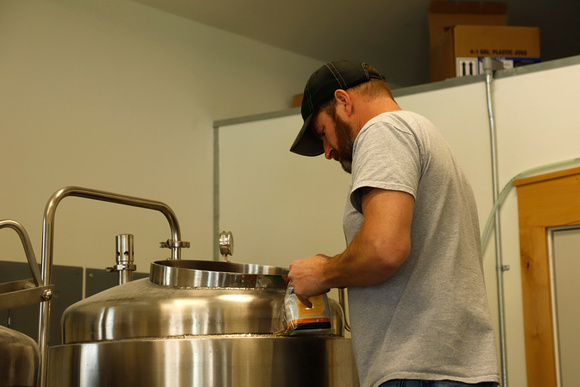 Doug adding yeast to the Oktoberfest. The addition of yeast is called pitching. The fermentation vessels are left alone for a number of weeks (depending on the style). 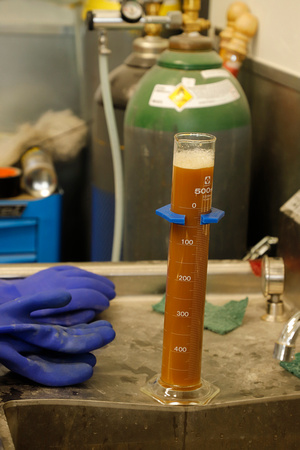 Doug took a sample from each batch in order to measure the original gravity, which is a predictor of the final alcohol content, and is compared with a final gravity reading after fermentation to calculate the ABV. 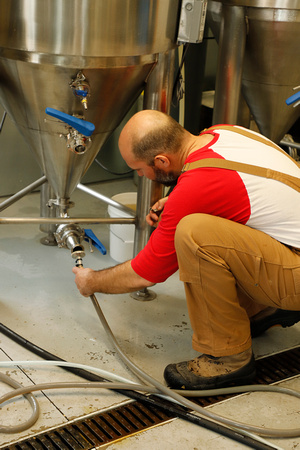 Despite a relatively tight space, Doug and Brian worked in harmony and neither one tripped over the hoses! 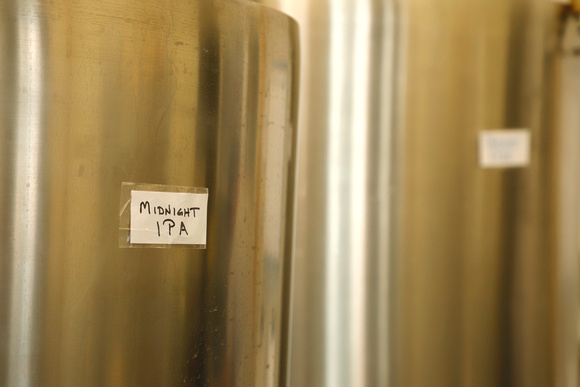 At the beginning of the day, Brian had suggested Midnight IPA as the name (after the wheat variety). At the end of the day, Doug slapped a label on the fermenter.

I'd like to thank Doug and Brian for allowing me to observe and photograph their process. They both took time to explain each stage and made me quite welcome. I am more used to drinking their beers, and I found this very insightful, as I hope you did too!